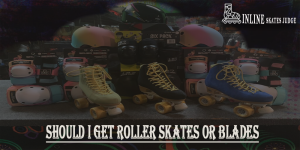 The question, should I get roller skates or blades, can prove to be quite controversial among skaters. Inline skaters will defend their kind while people use rocker skates will say that you should definitely get those. In order to help you out, we have put together the pros and cons of both roller skates and roller blades in this article so that you can choose the best one for yourself. Let’s go!

Inline skates allow you to go faster so they are much better for longer distances. You can take your roller skates on long distances too, however, they will be slower so you might struggle to keep up. For very young children, roller skates might be much easier as they provide better stability. On the other hand, inline skates allow children to learn skating in all its glory.

Used in roller derby for hockey, roller skates work better for indoor skating. Artistic skating can be done in both; however, inline skates provide increased maneuverability which allow you to skate across little cones. Roller skates can be used on ramps while inline skates make it easier for you to perform tricks.

Well, this was just a general comparison between the two. Let us go into further detail to help you in your decision.

Following are some of the factors you need to consider before you choose the best type of skates for yourself.

For children who are very young, both roller skates and inline skates work well. Even though roller skates provide better stability and a slower speed which makes them easier to use, children are usually quick learners which allows them to learn either in a very short time.

Skates like fisher price come in roller skates for children. These are just like small shoes which need to push dragged along. Children might find it hard to balance inline skates in the beginning but once they learn to do that, the rest of it will be a piece of cake.

Planning on racing in your skates? Well, then inline skates are the only ones for you. These go much faster than roller skates and so you will be able to cover longer distances in a shorter time. Make sure you practice a lot in inline skates before you go racing so that you can prevent all kinds of accidents.

Tricks can easily be performed in both. Inline skates are preferred by experts for tricks because they provide higher speeds and greater maneuverability. They also have a much more aggressive design which makes them better suited for the task.

Which ones are easier?

If you begin skating at a young age, you will find both roller skates and inline skates to be quite easy. Inline skates, however, make it easier to cover longer distances in a short time due to higher speeds. For both speed skating and outdoor skating, inline skates are definitely the better choice.

On the other hand, roller skates do provide easier stability which makes it easier for you to stand up straight on them.

In case of skates, you will get what you are paying for. Both inline skates and roller skates have almost similar prices and there might only be a very small difference in price which shouldn’t really affect your final decision. For beginners, skates for around $70 will work well as you are just beginning to try out skates and so you shouldn’t invest too much in case you decide not to continue.

If you are looking at a branded pair, you may have to pay more than $200 and if you plan to use your skates regularly then spending this amount will surely be worth it.

The shape and size of the skates might vary according to brand rather than the type of skates. Both inline skates and roller skates have almost similar shapes so there isn’t big difference between the shoe shape. You can try out different brands to see which fit you prefer the most.

We hope this article helped you get the answer to your question: Should I get roller skates or inline skates? We have compared both the skates based on different factors so that you have complete information about both of them. This way you will be able to make a choice based on your own choice and requirement. We would love to guide you further if you have any other queries.

Should I Get Roller Skates Or Blades FAQ :

1. Which are better roller skates or blades?

Answer: This depends on various factors including your requirements and the application that you need the skates for.

2. Are roller skates or blades easier to learn?

Answer: Roller skates provide better stability so they make it easier for you to stand on skates in the beginning.

3. Are roller blades or skates better for beginners? 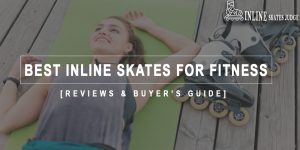 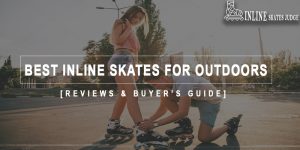 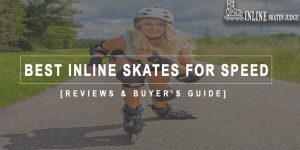 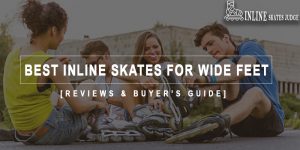